Day 44 of the Aurora theater shooting trial, defense expert states that Holmes was insane during shooting 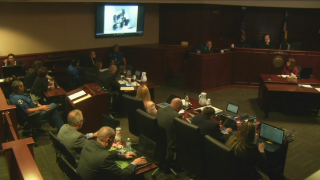 On day 44 of the Aurora theater shooting trial, defense psychiatrist Dr. Raquel Gur of the University of Pennsylvania testified that James Holmes was psychotic at the time of the shooting. Her conclusion was based on over 28 hours of interviews with Holmes and consistent with his belief  about “human capital” that somehow motivated Holmes. The human capital concept argued by the defense originates from a text message Holmes sent to Gargi Datta, “You take away life, and your human capital is limitless.” What that means, we aren’t certain. In addition to the interviews, she also reviewed in detail the spiral notebook used by Holmes to plan his attack.

Gur is arguably the strongest witness on the defense because she is an expert in schizophrenia with substantial clinical experience. The prosecution attacked her credibility yesterday by arguing that she wasn’t fully board certified in psychiatry or psychology. The prosecution also attempted to use previous statements she made about trial witnesses and whether they are influenced by the side that they are testifying for against her. They also argued that her notes were premature conclusions made only after the first 13 hours of interviews and not the entire 28 hours of interview time. Dr. Gur is an important witness to the defense in this trial because the defense is claiming an insanity defense which requires an expert to testify in support the claim. Dr. Gur was previously an expert witness during the trial of Ted Kaczynski, also known as the Unabomber.